There were snakes and ladders on the second day of qualifying rounds for the Star Sailors League City Grand Slam on Lake Astler, set in the heart of Hamburg, Germany’s second largest city. A light gradient wind from the north produced difficult conditions to master. The land effects around the lake produced a course with more traps than a prophet’s tomb. Tomorrow is the last day for the qualifying section of the SSL City Grand Slam, the top 30 boats will go through to the second round and 56 teams will be eliminated. 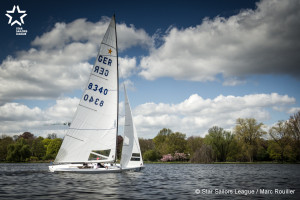 “I put it down to my improved French – smiled George – Seriously, we have a great understanding in the boat, which makes a big difference in light airs because Patrick and myself, need to work together, the choreography has to be spot on, it’s too late if you have to discuss it.” 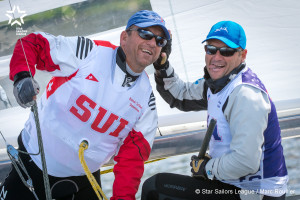 Local sailors, Johannes Polgar and Markus Koy, in fifth, have the highest place of the 50 German teams taking part in the SSL City Grand Slam but just behind the local Hamburg sailors are Robert Stanjek and Frithjof Kleen.

“We are happy to end the day in fifth – commented Markus Koy – In the last race we rounded the first windward mark in 16th position, which was not ideal but we kept at it and just concentrated on passing boat after boat. By the bottom mark, we had got up to sixth place. Everything went right for us on the last beat and we won the race, quite a comeback from mid-fleet.”

“Concentration was very important today – commented 2014 Star World Champion, Robert Stanjek – Normally, we tend to look at the sails 30% of the time, the water around the boat 30% of the time and forward 30% of the time. Today, 90% of the time was looking far up the racetrack, to get into a position to make the best of the pressure. The wind is forecast to increase for the rest of the regatta and changing into medium to heavy mode will be important from tomorrow.” 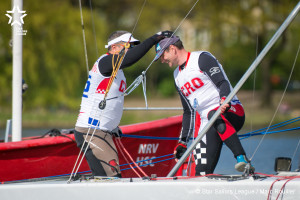 There was joy and pain for the Croatian Brothers, Marin & Dan Lovrovic. In the first race of the day, a terrific start at the pin end gave the Croatian’s their first win of the regatta. A copycat pin end start gave them a substantial lead in the second race of the day but a double-whammy had Marin punching the deck with frustration. The wind failed to materialise, as they chose the western shore for the beat to finish, and five boats passed the Lovrovics on the eastern shore. There was more bad news as they were disqualified under the Black Flag rule. The Croatian team have lodged a protest which will be heard tomorrow. Several other teams were also disqualified under the Black Flag Rule in today’s races including top contenders, Torben Grael & Stefano Lillia andHubert Merkelbach & Gerrit Bartel.

Racing at the SSL City Grand Slam continues tomorrow with one final race for each group. Only the top 30 teams will qualify for the second round. First group will start at 12.00 CET with live coverage of the action starting at 11.45 CET, with expert commentary from special studio guests. On the water, the latest in hi-tech camera technology, as well as Virtual Eye 3D Graphics, will provide thrilling viewing. Armchair sailors can also race the course with Virtual Regatta.

For photos, videos, results and to watch the live go to:
http://city.starsailors.com/