The best sailors of the SSL Ranking present in Hamburg pose in the Hamburg City Hall.

The curtain call for the first SSL City Grand Slam was the official Opening Ceremony, on Monday, 2nd May. The spectacular event was held at the prestigious and iconic Town Hall of Hamburg, Germany.

All of the 180 Star sailors, representing 20 Countries, gathered in the historic building for the welcome messages of city and sailing authorities just a few hours before the warning flag for the first SSL City Grand Slam race will be lifted tomorrow, Tuesday 3rd May at 10 AM CET. On lake Alster, every day to Saturday 7th May, 90 Star teams will race to win the first SSL City Grand Slam, organized by the Star Sailors League and the great support of the Hamburg and Luebeck Bay Starfleet and Norddeutscher Regatta Verein. 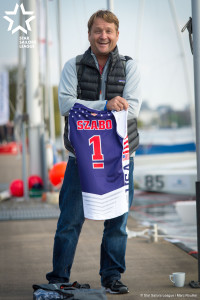 With an astounding participation of amateur Star sailors, the entries limit set at 80 boats was reached in less than 24 hours, the other 20 teams are the professionals, invited by SSL. Among them the current Star World Champions Augie Diaz with crew Bruno Prada (two Olympic medals with Robert Scheidt), Torben Graelwho is the most decorated Brazilian Sailor of all time with crew Stefano Lilia from the renowned Star boat shipyard, Polish Finn gold medalist Mateusz Kusznierewicz, Olympic bronze and SSL President Xavier Rohart racing with longtime crew Pierre-Alexis Ponsot. On the racecourse the main language of the competitors will undoubtedly be German as they represent the majority of the fleet with 50 teams. Top Star sailors did not miss the opportunity to race on their home water: local heroes Johannes Polgar and Markus Koy, Bacardi Cup holders Robert Stanjek and Frithjof Kleen and ‘Doctor’ Hubert Merkelbach will be the boats to watch. 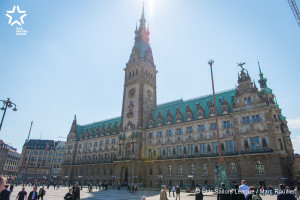 The first team to cross the line during the Final will be the first SSL City Grand Slam winner and also awarded with the 50th Erich F. Laeisz-Prize.

To see full schedule, both sailing and social:
http://d40hnaevzk.preview.infomaniak.website/wp-content/uploads/2016/01/First-SSL-City-Grand-Slam-2016-Sailing-Instructions.pdf