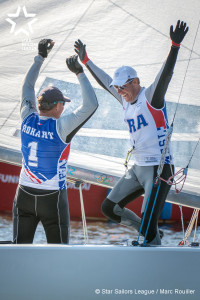 The Polish team had a tough day: in the first race Kusznierewicz & Zycki were pushed out at the top gate but battled back to take third, the second race saw the Poles also fight back from a poor position to take another third but a 23rd in the penultimate race was to be their discard, eighth place in the last race, compared to Negri & Lambertenghi’s second, meant the two teams are tied going into tomorrow’s final race of the Second Round. The winner of the Second Round takes a valuable bye into the SSL City Grand Slam Final, second place gets a bye to the semi-final. Kusznierewicz & Zycki and Negri & Lambertenghi are the likely top two. 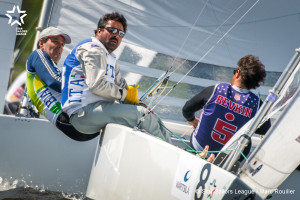 Race 2 – Stanjek & Kleen came out fighting for the second race of the day, to claim their second victory of the regatta, and more importantly back into the top ten cut off zone. Negri & Lambertenghi scored another second place, relying on their excellent start to stay in the top three all the way around the racecourse. Kusznierewicz & Zycki were third retaining the overall lead. Luke Lawrence & Ian Coleman retired from the race after a big pile up at the top gate. Eivind Melleby

& Joshua Revkin failed to finish the race, after breaking their forestay. The Norwegian/American duo hurried back to the Norddeutscher Regatta Verein where NRV club member, Olaf Richter, was quick to lend them his boat. His action meant that they just made the start of Race 3, where they miraculously came 6th. Lawrence and Coleman also returned for the next race to make 8th place.

Race 3 – Conditions built at the start and with gusts of 15 knots, provided the windiest conditions since the start of the regatta. Melleby and Revkin, sailed at full chat to join the start on the ‘B of the Bang’ but there were too many boats over early and a General Recall was signalled. In the Black Flag restart, Polgar and Koy got away well, as did Torben Grael & Stefano Lillia. Xavier Rohart and Pierre-Alexis Ponsot got in the groove in the second half of the race to take a much needed win, Grael & Lillia were second and Negri & Lambertenghi third. Kuznierewicz & Zycki scored a lowly 23, and Stanjek and Kleen 24th putting severe pressure on the past 2014 world champions, who are now out of the top ten.. 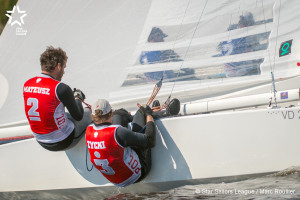 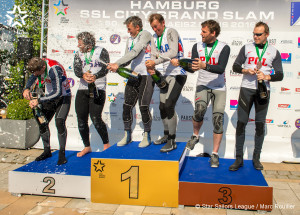