The sun shone brightly on the City of Hamburg today, as three million people celebrated the 827th birthday of its harbour. Thousands of locals and visitors lined the banks of Lake Alster to watch the third day of the SSL City Grand Slam, 86 Star Teams raced in three flights and put on a spectacular show on a tight windward leeward co 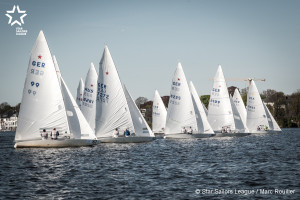 urse. The top and bottom marks were within yards of parklands and bridges crammed with racing fans. After a delayed start, allowing an easterly breeze to settle in, the NRV race committee set inch perfect courses. With legs of just 600 metres, great starts and instinctive boat handling was at a premium today.

In the first heat, Italian duo, Negri & Lambertenghi won a battle royal against two passed Star World Champions. Germans Stanjek & Kleen led at the start, nailing the committee boat end of the line to lead at the first mark. Negri & Lambertenghi and Polish team Kusznierewicz & Zycki, were hot after the Italians, but once into clean air, Negri &

Lambertenghi kept it simple to win the race. The Poles and Italians were locked in battle right up to the downwind finish. Stanjek & Kleen stayed high, refusing to let the rapid Polish team pass to windward, but a spectacular gybe by the Poles, nearly wiping the stern off the Germans,

put them to windward and through to steal their wind. Three textbooks roll gybes in the last few metres, saw the Polish team slide through the line sideways, just edging the Germans into third place.

Kusznierewicz & Zycki finished the day at the top of the leader board to win the coveted Heinz-Nixdorf Trophy. “We are very happy with the boat and our performance – commented Dominik Zycki – The first round has been very enjoyable which has helped us remain relaxed and in control. However, tomorrow, we will just be down to the top 30 boats and there will be a lot of pressure to make the top ten, let alone stay on top to get a bye to the final. We will not change our style, things are going well, so we intend to just continue.” 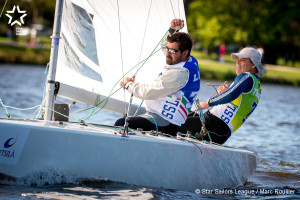 The last flight of the day produced a fantastic battle between a German team and the reigning Star World Champions, Augie Diaz and Bruno Prada. Hubert Rauch & Kilian Weise got away to a great start at the committee boat end and accelerated into an early lead. Diaz & Prada went for the pin end and judged the line perfectly, but it was the other side of the course that paid, and Rauch & Weise led the fleet. By the last leg, Diaz & Prada were all over Rauch & Weise and in the private battle, Diaz & Prada took the lead, on the last leg, to take the gun. Rauch & Weise were second with the young German team of Dominik Fallaise & Markus Kattenbusch in third.

Racing starts tomorrow at 10am CET and just ten minutes earlier, at 9.50am, the live streaming on the Internet for FREE, with expert commentary from special studio guests, including Dennis Conner. On the water, the latest in hi-tech camera technology, as well as Virtual Eye 3D Graphics, will provide thrilling viewing. Armchair sailors can also race the course with Virtual Regatta.